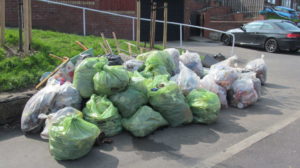 Story and photos by Deborah Blencowe

Saturday 30th March 2019 I arrived on Earl Marshall Road at 10am for a little pick that had been arranged. The event was well attended and co-ordinated by our Firvale Community Learning Champion, Usha Blackham.

Again, an enormous amount of litter was evident. Walking past one garden I saw the owner and asked if it was alright for me to remove the rubbish that had obviously been thrown over her fence. Her reply was indeed yes, but she is absolutely sick herself of clearing waste from her garden on a daily basis.

On the poster that had been displayed in the area to advertise the pick, it was mentioned that residents were welcome to bring out any waste that they might have and we would clear it up. Oh, dear, what a mistake that turned out to be. People just took the absolute advantage of this. 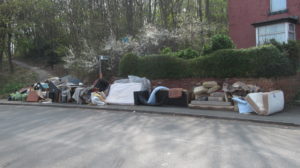 Instead of bringing out just general waste, we got sofas, beds, mattresses and any type of furniture you could care to mention. We finished up having to say “No, we can’t take anymore”. That was quite frustrating and upsetting as to how people just thought that they could take advantage of what was supposed to be a charitable offer. I think a lesson may have been learned there not to offer that sort of service again.

I’ve said it before, but the message does not appear to be getting through to certain people. This is not acceptable and the situation needs addressing as a matter of urgency. As a distributor of The Burngreave Messenger, I obviously see a lot of the area and the problem is certainly widespread and I’m disgusted that people can live like this and not care. I’ve been a resident of Burngreave for over 26 years and the situation is just getting worse.