If you were out and about on the roads around Rock Street, Melrose Road and Spital Hill on Saturday 18th May, you might have seen some groups of people getting busy with litter pickers and brooms.

Or maybe you spotted some local roads looking cleaner than they normally do? This was all thanks to Pitsmoor Adventure Playground and Big Brother’s Litter Busters, who, helped by funding from SOAR, carried out a super-sized litter busting event.

The highlight was the hire of a road sweeper to work alongside the people picking and sweeping on the pavements; it swept and sucked up rubbish and debris in no time leaving the roads looking fantastic. One local resident was so inspired by seeing the community in action that he got hold of a second hand lawnmower the next day and mowed some of the overgrown public spaces. 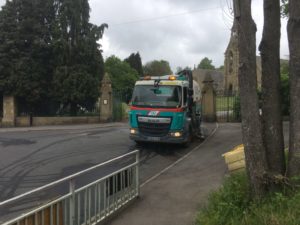 But the event wasn’t just about picking rubbish up, it was about trying to change attitudes to litter – the message is simple: don’t drop it… pick it up. As part of this, some of the team headed down to talk to businesses about signing up to the Clean Sheffield Pledge. They got a warm welcome from shop owners who all agreed that litter was a problem; it’s bad for business, and attracts rats. A big thanks to all the businesses who signed the pledge to clean in front of their shops.

There wasn’t time to get around all the shops, so if you have a business that wants to get involved then you can email streetsahead@sheffield.gov.uk and tell them that you would like to sign up.