It was a no brainer for us in the Burngreave Clean Air Campaign to support the world wide climate strike day on 20th September, inspired by Swedish schoolgirl Greta Thunberg. There were thousands of actions in over two hundred countries around the world. Sheffield school students were planning a rally and march in the city centre and had asked for support from adults via Sheffield Trades Council. We agreed that we could give them this support by organising a feeder march from Abbeyfield Park down Burngreave Road and Spital Hill to the massive event in town.

We had banners, placards, whistles, a giant kingfisher and an inflatable dinosaur and, of course, our greatest asset, our brilliant Burngreave protestors. We were proud that Burngreave was the only part of Sheffield to have its own local march. About forty of us joined up with the main march of an estimated 5,000 in the city centre.

It was so inspiring to hear so many school students speak up against the climate emergency at Barker’s Pool. They were committed, articulate and organised. It gave me great hope that the world might just get through this climate crisis with more humanity and respect for our world than we have seen in recent decades.

Although our campaign’s main objective is to fight for improved air quality in our community, we recognise that the twin emergencies of air pollution and climate breakdown have similar causes and similar solutions. While lethal levels of air pollution kill over 500 Sheffielders and millions around the world each year, the climate emergency threatens our whole planet and our very existence.

Both climate and air quality emergencies require drastic intervention on the national and international stages. They also require that ordinary people come together and ensure that the solutions to these problems bring in radical changes that will make a fairer society and be of benefit to us all.

Talking to people in the cafés, barbers and shops on Spital Hill, it is apparent that many of our local residents are craving for environmental justice. Some of those we had spoken to had been driven from their homes in countries where the effects of climate change had already caused environmental destruction, civil breakdown and loss of life. So we have strong local evidence that the climate emergency is already here. 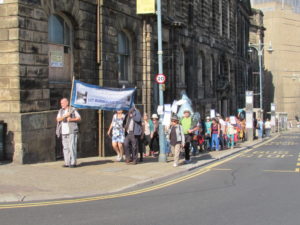