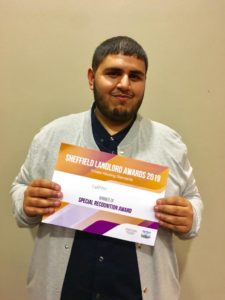 Sheffield City Council Private Housing Standards held its annual landlord awards at Sheffield’s Mecure St Pauls Hotel on Thursday September 12th. Now in its third year the awards recognise good landlords who go over and beyond to assist their tenants in a market where more bad news is heard rather than good.

The event was attended by many landlords, agents and members of Sheffield’s private housing teams. The event had a caricaturist who captured many great caricatures of the people attending followed by an awards ceremony and three course meal.

This year one of our local estate agents, iLet4You were shortlisted for an award – the only agent in the Burngreave ward to be nominated by members of the public and its tenants/landlords. iLet4You has been a finalist for a variety of awards in previous years, such as being the most improved and working in difficult circumstances.

After a very tense delay it was confirmed, that they had won the award for special recognition. Speaking on behalf of iLet4You, Operations Manager Mohammed Rawais commented:

“After many years of hard work and determination we are happy to bring this award to Page Hall as I feel without our lovely community we would not be where we are today. It is a great honour as it gives our community excellent positive feedback. I especially thank everyone who nominated us, our tenants, our supporters, wellwishers and of course our competitors for keeping us on our toes.” 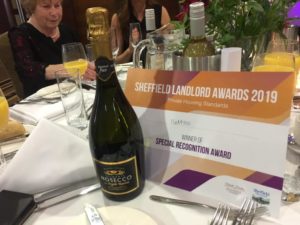