Story and photos by Tim Neal

On Tuesday 19th November, students at Astrea Academy came face-to-face with a lifesize, fire-breathing, paper dragon made from 1,200 A4 pieces of paper. Thirteen metres long, with a wingspan of six metres, the freestanding beast was designed by Yorkshire-based paper artist and illustrator, Andy Singleton, and took almost one hundred hours to design and create. 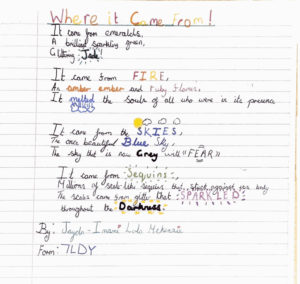 Art students in Years 7 and 8 took these concepts and used them in their own designs as part of a school-wide competition. In English, students used their creative-writing lessons to write about the creature to be in with a chance of attending the unveiling.

The winning children also had the chance to quiz the artist about his work. They found out that the artist who inspired Andy most was Vincent van Gogh and that the first sculpture he saw was when he visited the Yorkshire Sculpture Park as a child. Andy told the students it was the first time he’d installed a sculpture in a school and described how unique this opportunity is for everyone involved.

The winning pupils were very excited to be involved in the event. Saif Abdullah, age 13, said:

“I did a quick sketch and trialled what would work. It took me hours to colour it. I love mythical creatures, so this competition was amazing to enter. I was so proud when sir announced that I’d won. The sculpture is so big, I was so excited when I walked through the door.”

Eleven-year-old Jayda-Imarni McKenzie recited her winning poem at the unveiling. She told us:

“I wanted to enter because I enjoy writing, but I didn’t think I had a chance of winning. When my name was announced, I was so excited! We never thought the dragon would be this big, we just couldn’t imagine it, when we walked in we were just gawping at it.”

“Winning this competition is amazing, I have achieved something I never thought I would. It was great to ask Andy the artist some questions, I feel lucky because not many others would get the chance to speak to an artist about what has inspired him.”

Andy Singleton was delighted with how the unveiling had gone:

“I’m so happy that instead of being recycled my sculpture has found a new home and become something to inspire these local students. I saw some of the winning competition entries and I’m amazed. Technically the artwork is really impressive, especially for Year 8 pupils.”

“It’s so important to me to ensure our students have access to a range of balanced experiences, inside and outside the classroom. Art and design is a true passion for me and lots of our students.”