Election fever came to Burngreave in early December with dozens of campaigners out on the freezing streets delivering leaflets and engaging ion doorstep conversations. Thankfully, it was somewhat warmer in Christ Church, Pitsmoor, where a hustings was held on Sunday 8th December.

Representatives from five of the parties standing for Brightside & Hillsborough attended, including the candidates from Labour, Gill Furniss, the Green’s Christine Gilligan Kubo and Johnny Johnson for the Brexit Party. The Conservative and Liberal Democrat candidates could not attend, but were represented by their colleagues standing in Sheffield South East, Mark Bayliss and Rajin Chowdhury. 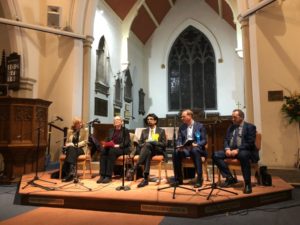 Each spoke briefly to introduce themselves, and their key concern for the coming election. Unsurprisingly, the Brexit, Conservative and LibDem candidates all spoke about the need either to ‘get on with’ Brexit or to stop it, whilst Christine highlighted the need to address the climate crisis. Gill Furniss chose to focus on the levels of child poverty.

The lively audience were keen to engage the entire panel on a wide range of issues – whether a second EU referendum would be a good idea; how we can successfully decarbonise our economy; support for refugees and asylum seekers; ending child poverty and about trust in modern politics. Calls to end Universal Credit, and (from the Greens) to introduce a ‘Universal Basic Income’ were well received, and all the speakers made clear their support for ‘genuine’ asylum seekers – including supporting their right to work. There were few surprises, but there was a definite pleasure that the panel had at least attempted to engage the audience without resorting to cliché or bluster.