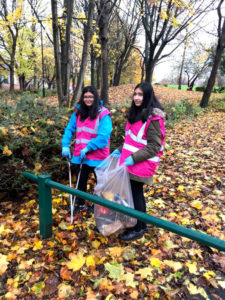 Story and photos by Sahdya Ali.

Our new litter picking group held our first litter pick at Ellesmere Park on Saturday 16th November. There were sixteen wonderful volunteers on the day. We did get some light rain after an hour but we went on until we had collected over forty bags of rubbish and lots of other stuff, including a television!

Before we held the litter pick Geraldine Houlton, who initiated the restoration of the park, made a request to the council to cut down some over grown bushes. Thanks to their work the litter pickers were able to clear the area. The park has been neglected for a long time, but within two hours it was litter free thanks to all the people who came along to help tidy it up. We are also very grateful to Amey who then came out on the same day to pick up all the bags that we had filled.

Our plan is to hold a community litter pick every month so that we can help towards keeping it looking presentable and safe for people who want visit. We are hoping to get the benches replaced and some play equipment installed.

We would be delighted if more residents were to get involved in the next litter pick which is being held on Saturday 21st December at 10 am, we will be meeting near the Ellesmere Children’s Centre (litter picking equipment will be provided). We also want to hear ideas or suggestions from local residents as to what they want to see happening in the space within the park. Please get in touch with us by email on ellesmerelitterpickers@gmail.com or via our Facebook page – Ellesmere litter pickers.