Headteacher, Rachel Smith has been in post just over a year and loves every minute of the job.

Mrs Smith can be seen in the community every morning to meet and greet students and encourage them to get into school on time.

She is very keen to point out that the ‘rapid improvement’ Ofsted highlighted is a real team effort. 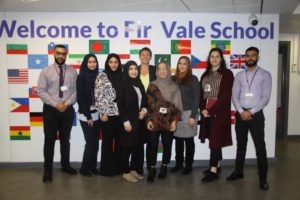 At Fir Vale School, there are some pupils who liked the school so much they came back to work and support the new generation as staff members.

“It’s great to have the opportunity to be able to give back to the school which gave me so much. It is so nice to be part of a community school that is making a difference.”

In the spirit of giving…

Fir Vale School is very much in the spirit of giving by raising over a £1000 already for The Shelter, Children in Need and MacMillan Cancer Support.

The school is still going strong with donations being collected for the Shoe Box Appeal and The Food Bank.