Story and photo by David Hamburg

Several hundred people gathered in London at the end of November to protest against the far-right Slovak political party Kotleba – the ‘People’s Party Our Slovakia’ known in Slovak by the initials LSNS. They are an openly fascist party, who repeatedly deny the holocaust. On 23 November, they came to London to spread unrest fear, fascism and racism. Our group from Sheffield went to oppose them and we were joined by people from Derbyshire, Dover and London.

LSNS work in the UK to spread lies and hoaxes, particularly discriminating against the Roma people. They make up lies about ‘conquering’ muslims and Roma people and about cruel religious practises. 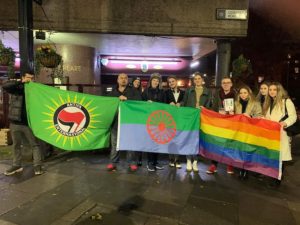 Fortunately, more Slovak people came out to oppose them than to support them. Marian Kotleba and Milan Mazurek, leading figures within LSNS, were due to speak at the meeting. Mazurek was an MEP until he was forced to stand down earlier this year following a series of highly racist statements, calling for Roma people to be burnt and left to rot. Because of the opposition, neither man dared to turn up to speak.

We will not let this neo-nazi group spread their message of fear, or their hatred of Roma people because of our different ethnicity, colour, and cultures. I came to this country to settle here because no one is racist against me, or discriminates because of my colour or ethnicity, because here my children can learn and have a future. I am proud of all those involved, who were in London on the 23 November.