Faces were wrinkled up in puzzlement last month as various local residents tried to work out why some of our local litterbins are being wrapped in plastic, making them unusable. 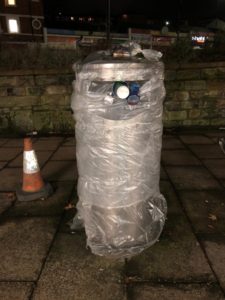 Helen Rice spotted a number of such bins outside Burngreave Library, and there were more by Pure Gym at Tesco. Various possibilities were offered as to why they might be covered over – such as to avoid the risk of explosives (!) being put in them – which seems unlikely, not least because only one of three bins next to each other was wrapped up – or because they had had dangerous items, such as syringes, thrown into them. But some of the bins had been covered for months, so that too seemed unlikely.

In some cases, the bins appear to have been wrapped up whilst empty. In others they have been wrapped while full. There seems to be no logic behind which bins are encased and which aren’t. It wasn’t even clear who might ‘own’ the bins – if they are on private land, they would be the landowner’s responsibility, not the council’s – although the landowner may contract SCC providers Amey to look after them, as they do on the Moor.

Eventually, one bright spark realised the person who might know is the Cabinet member for environment, streetscene and climate change, Burngreave’s Mark Jones. He too was initially baffled. But, between his patient enquiries and the persistence of fellow councillor, and Burngreave resident, Sioned-Mair Richards, some progress was made.

Some bins are indeed operated by the council, and simply needed emptying – which has now been done. However, some of the others, such as those outside Tesco, still have no obvious owner, and it is not at all clear who actually has the responsibility to look after them! Enquiries are ongoing, but, for now, the mysterious plastic remains…

If you see any more shrink-wrapped bins, please let us know about them!