At Burngreave Clean Air Campaign we were very dismayed to learn that the number 11A bus would no longer be entering the grounds of the Northern General Hospital (NGH) from 26th January.

This follows the hospital’s decision earlier last year not to allow Stagecoach’s daytime X2 route because of increased “congestion”. We hoped that the introduction of a regular bus service would reduce the number of cars going in to the NGH and thereby actually reduce congestion, not only within the hospital grounds but also on local roads.

As local residents Burngreave clean Air Campaign believe that improved, affordable and environmentally sustainable public transport is the only solution to the consistent illegal levels of traffic fumes in Burngreave. We are proud to have the Northern General in our area however, with 6,000 staff and thousands of outpatient and hospital visitors daily mainly by car, we are concerned that the hospital itself is causing sickness and death in our area.

Air pollution has been estimated to kill 500 Sheffielders each year and affect many school children with asthma. Life expectancy in Burngreave at birth is about five years lower than the average for the UK. Air pollution is a contributory factor to this appalling statistic.

Burngreave Clean Air Campaign has written to the hospital Chief Executive asking for an explanation for this decision to curtail these routes. We have also started a petition for local people to sign. 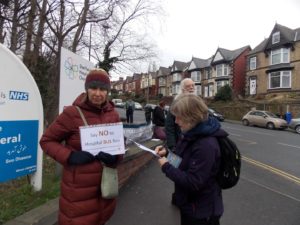