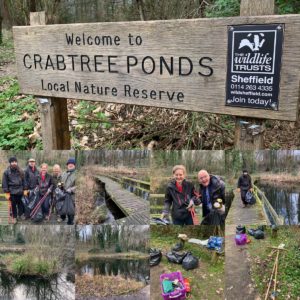 We did a litter pick, shifted some fly tipped objects including a reclining chair, a spare wheel and headphones with four metres of cable. We also checked our next boxes in preparation for Spring.

We were joined by a new “volunteer” who turned out to be Andy Kershaw from BBC Radio Sheffield. Andy helped with the litter pick and interviewed Ranger Rachel Stevenson and some of the volunteers. They explained that fly tipping was a big problem on the site and that fly tippers never think of the harm that they are doing to wildlife and to local amenities.

Rachel talked about the hidden gem of Crabtree Ponds and appealed for more volunteers to come and help out on the first Monday of every month, 10am to 12.30pm. Although the council owns the land, it is leased long term to Sheffield and Rotherham Wildlife Trust. The pond used to be in the grounds of Crabtree Lodge and is very deep.

Amazingly, during Andy’s recording a kingfisher was seen on the lower wet area on the River Crab, known as the ‘sink’. With impressively speedy editing, the piece went out on Radio Sheffield about an hour later.

Andy Kershaw was not the only surprise visitor that morning: we saw a great spotted woodpecker and two parakeets being threatened by a buzzard. In total 29 species of birds have been seen at Crabtree Ponds over the past year. We had a cup of tea and luxury biscuits and we even got some work done too!

The Crabtree Ponds Reserve group AGM met on 9th March. Improvements to the range of habitats on the reserve, new measures to prevent fly tipping, the possible installation of new artwork and the usual maintenance were discussed. Consideration was also given to the potential impact of the planned building of 22 houses on the former Norbury site which adjoins the reserve.