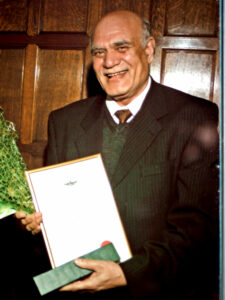 It is with great sadness that we report the passing away of Muhammad Iqbal. A true legend in Burngreave. I am very proud to have known Mr Iqbal and to consider him as a friend. Muhammad Iqbal was born in 1934 in a village near Chakwal in the Punjab. In 1963 he arrived in London from Pakistan, leaving behind his wife and three children. He came to Sheffield to stay with a friend in Attercliffe where he faced big cultural and social differences.

He started work as a labourer in Jessop Saville’s and moved from there to English Steel and thence to Vickers.

In 1967 he returned to Pakistan for eighteen months during which period his son was born. Back in England in 1969 he found work for British Rail working 72 hours over seven days.

In 1974 he took a job at Brown Bailey’s where he was promoted to foreman. Some white workers under him, who were his previous mates, refused to follow his instructions. The manager sacked the instigator but Mr Iqbal pleaded for him and eventually the man was reinstated. The two men became friends

In 1975 he sold his house to pay his family’s fares to come to England and they moved to Abbeyfield Road. Following redundancy in 1981, Mr Iqbal trained as a motor mechanic also studying Maths and English.

It was just after the Brixton Riots that Mr Iqbal became a teacher of English as a second language at Earl Marshal School. He was promoted to head of the education programme for all ethnic minorities and gained a teaching certificate at Huddersfield University. He then progressed to become the head at the Ellesmere Centre.

On 12th July 2006 Mr Iqbal collected his MBE from Her Majesty the Queen.

He loved watching and playing cricket, badminton, basketball and football and enjoyed spending time with his friends and family.

Many people in Burngreave will have fond and respectful memories of Mr Iqbal. One of his colleagues on the New Deal wrote:

“I have never met anyone like you before. Your continuing dedication, selflessness, hard work and commitment are beyond anything I have experienced before. Your tireless work for the people of Burngreave , regardless of their colour, race or religion and, despite how some choose to misrepresent you, has been an inspiration to me. If there were more like you in this country, we would have a much more harmonious society.”

“Muhammad Iqbal and I started working for the Sheffield Adult Education department on the same day. We were colleagues for many years, teaching in Sheffield College and later studying for further qualifications. Since retirement, I’ve missed his fund of anecdotes about his life in Pakistan and his journey to the UK, plus his sense of humour which often lightened the day.”

We send our condolences to his wife of more than sixty years, Gulzar Begum, his children (Azra, Shahid, Fakhira and Nadeem), his thirteen grandchildren, three great grandchildren and many, many friends.

The last words go to his family:

“He was a beloved dad, granddad and great granddad who will be dearly missed by his family.”