How often do you wake up in the morning and wonder whether you might randomly be hauled off to prison, having done nothing wrong, by the end of the day? For most of us, the answer is probably never. Yet for hundreds of people right here in Sheffield and for a few thousand across the UK, this is a daily reality.

Asylum seekers apply to the Home Office to become refugees, with the right to live safely here for at least five years. Sometimes their case doesn’t succeed, for all sorts of reasons, from missing paperwork to outdated information in British records. So like anyone else, asylum seekers have the right to appeal a decision and try again.

While they do that, they are given no housing, funding or means of support. But they are also denied the right to work. Sometimes they are imprisoned at a moment’s notice.

In February last year Victor Mujakachi was put in an Immigration Removal Center at Morton Hall and then released following a massively successful petition against his removal from The United Kingdom. He wrote an account of his detention experience which has been turned into an e-book. Victor Mujakachi’s story reminds us that asylum seekers are ordinary people whose homes, as the wonderful British-Somali poet Warsan Shire puts it, have become like ‘the mouth of a shark’ through political unrest, oppression of various kinds or war. It could happen to any of us.

You can read Victor’s book on the following link: https://tinyurl.com/yy3sgfct 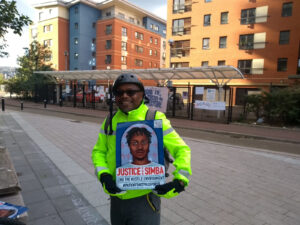