In a heated debate, pupils from Pye Bank Primary School decide if they think Emmeline Pankhurst was a hero or a criminal. 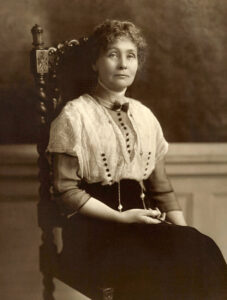 Emmeline Pankhurst was an activist who played a huge role in the fight for women’s right to vote. She was the leader of the Women’s Social and Political Union (WSPU), also known as the Suffragette movement. Despite doing very important things, her actions were fairly extreme and she did commit a number of crimes. There is a debate over whether she was a hero or a criminal. This argument needs to be solved once and for all.

Many people believe that Emmeline Pankhurst was a hero. This is because she was brave enough to stand up for her beliefs even though she knew that it may get her imprisoned. Also, she is considered a hero because if it was not for her, women would not have many of the rights they have today. She remained resilient despite persecution, so she is also a good role model for never giving up. This is why she is considered a hero.

The reason some people think she is a criminal is because she was guilty of many crimes such as burning down buildings and smashing windows. She also attacked members of Parliament and encouraged women to commit the same crimes. She was arrested and sent to jail several times. While in jail, she went on hunger strikes but was brutally force fed. Her actions were extremely controversial.

Personally, I believe that Pankhurst was a hero, because she was responsible for women earning the right to vote and make the choices they can today. I do not fully agree with their methods, but she was undeniably an important person in British history.

The vast majority of people believe Emmeline Pankhurst is a hero. This is because she stood up for her beliefs even though she had to face persecution. She went on hunger strikes so that the government noticed the inequalities of women. She influenced lots of people and she helped with the war effort. This is why people think that she is a hero.

On the other hand some people believe that she is a criminal because she committed many criminal acts: burning down golf clubs, hand-cuffing herself to the king’s gates and disrupted parliament. As a result of the criminal acts, lots of people could have been injured. She has also been arrested seven times.

In conclusion, after analysing all the evidence, I believe that she is a hero because she gained women’s votes in 1928 on the same terms as men and changed the future for women.