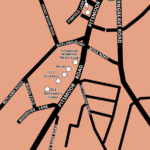 In the last edition we saw how Pitsmoor Road was part of the original main route from Sheffield to the North. But it was also the main street of Pitsmoor village.

There is a cluster of historic buildings which attest to the importance of this road and also the desirability of living in this fashionable suburb in the nineteenth century during a period which saw the dramatic expansion of Sheffield with the development of heavy industry and improved transport links.

Going down Pitsmoor Road from the Toll House, we come to the Bay Horse pub, a wonderful building, 200 years old and largely constructed of hand made bricks.
After that there is Pinfold Lane: The Pinfold was a pound where stray animals were collected under the care of the “pinder”. Pinder is still quite a common name in Sheffield.

Tucked away behind the corner of Pinfold Lane and Pitsmoor Road, there is stone building bearing the date 1833. This was the original “National” village school.

Past the junction of Rutland Road is the remains of the former Pitsmoor Working Men’s Club. Some of us have happy memories of this place but you didn’t mess about with the committee!

Further down on the right hand side, there is a cluster of four early 19th century classical villas each of which has grade 2 listed status. Number 257 became the vicarage of Christ Church, opposite when the church was built in 1850.

The Corbridge Memorial Home 185 Woodside Lane, was “for friendless and homeless girls, servants out of situations, girls with unsuitable homes and orphans.

As we go down Pitsmoor Road we reach the area formerly known as Woodside. These empty fields were the site of a once thriving community with pubs, shops and school. But perhaps it’s time that readers sent in their own memories and photos of this area. Over to you.