It was a wonderful day of fun and play at the Abbeyfield Festival, which was back for a triumphant summer 2022 return on Sunday 31st July. Despite a few early rain showers, the skies finally cleared and everyone at the festival enjoyed a glorious day of sun.

There were many stalls sharing information and selling a variety of food; local bands and DJs took to the stage and Pitsmoor Litter Pickers were on hand to help with the tidy up.

Children enjoyed seeing and getting involved with Martin Currie’s creative cardboard workshops where they could build large models and dens out of old boxes. Martin said:

“Thank you everyone who pitched in for me, the creative cardboard section was terrific. As were all the other zones.”

“Thank you so much to everyone who helped to make the festival happen, and thank you for coming, sharing, and celebrating the place and community that is Pitsmoor.“

“It was awesome and thank you so much to all the young people that put so much time in at the end to help tidy when we needed it the most. Priceless! What a fabulous community we live in.”

Puppeteer Patrick Amber took to the park to delight the children dressed in a spectacular troll costume of his own making. Children even had a go at wearing and walking in the oversized feet.

“It was a fantastic event. So good to see local folks again. When’s the next one?”

Well done to everyone involved for making it happen. Let’s hope it can be repeated next year! 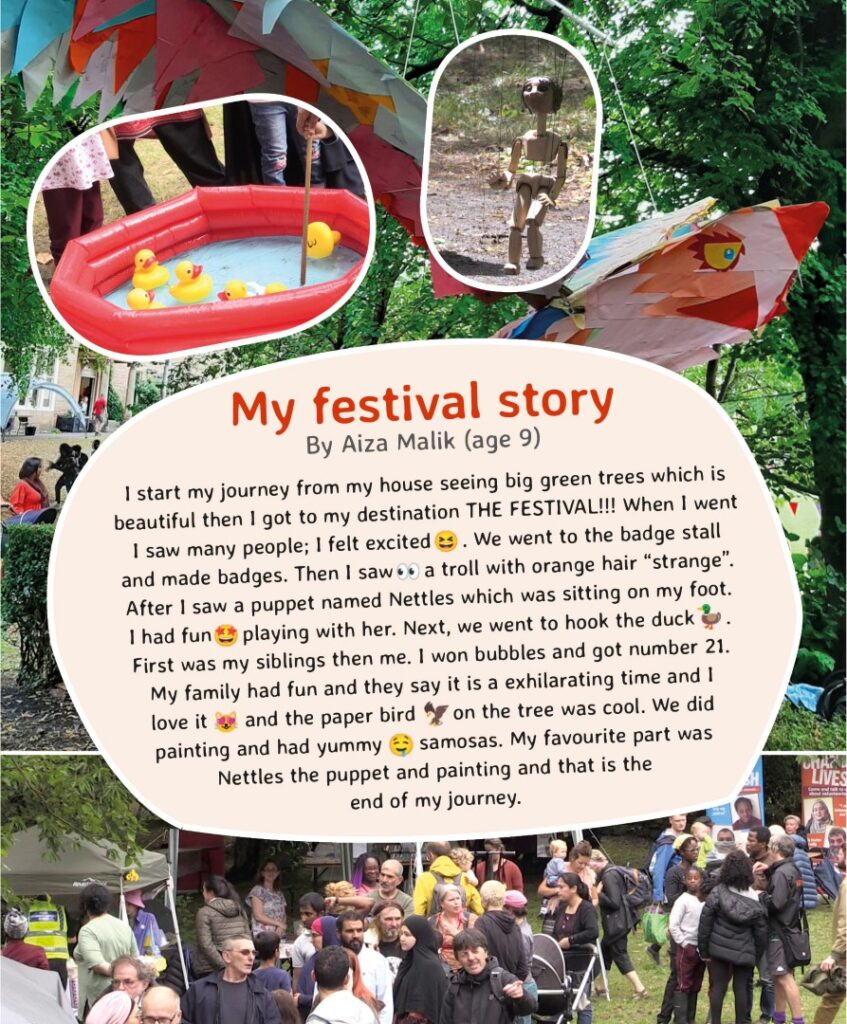 I start my journey from my house seeing big green trees which is beautiful then I got to my destination THE FESTIVAL!!! When I went I saw many people ; I felt excited

. We went to the badge stall and made badges. Then I saw

a troll with orange hair “strange”. After I saw a puppet named nettles which was sitting on my foot. I had fun

playing with her. Next, we went to hook the duck

. First was my siblings then me I won bubbles and got number 21. My family had fun and they say it is exhilarating time and I love it

and the paper bird

on the tree was cool. We did panting and had yummy

samosas. My favourite part was nettles the puppet and panting and that the end of my journey.

This article is taken from our e-bulletin, which you can download here.

In what we hope will be the first of our ventures into video, we’ve made a short documentary about the Abbeyfield Festival: