George & Brian debuted in the Messenger in 2011 and since then have evolved from basic drawings to the characters we know and love… Here’s what creator Edgar Lowman wrote on his blog:

George and Brian started through inspiration from a Christmas ‘Beano’ magazine in 2010, which was filled with tiny characters getting up to a myriad of activities at the edge of the page. I tried sketching them, putting some of my own inspiration into them.
Since then they’ve evolved:

At the start they were roughly drawn, but over three years they’ve become cuter, more colourful, and a bit chubby. And although they usually wear the same outfits… 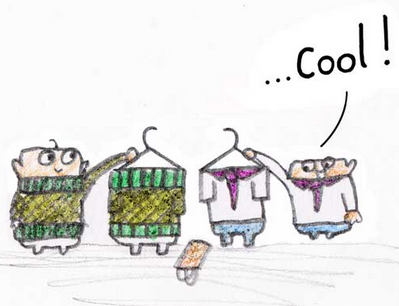 …they often change to suit the occasion: like George’s winter or Valentine’s gear, or Brian’s autumnal or Birthday accessories:

And there are even new characters arriving into the comic strips like Father Christmas:

An interview with Edgar from December 2011

14 year old cartoonist, Edgar Lowman, started his cartoons towards the beginning of his time at secondary school. Now in year 10 he is still creating his imaginative adventures and is looking to share them with everyone else!

Coming from a very creative family, it’s hardly surprising these funny mini cartoon strips just flow from Edgar’s hand. A hint of inspiration comes from comics he has read himself: the classic Beano and comic duo Wallace and Gromit.

His cartoon adventures follow friends George and Brian, two calamity magnets, in a slap-stick style of their day to day life. There are holiday themed strips too; a Halloween strip sees George trying to trick Brian but they find themselves faced with a real monster!

Edgar has written more comic strips called ‘MADventures’ about the even more adventurous Michael and Nibbles McGlee whose shenanigans have included a trip to the moon! These characters Edgar featured in a magazine he created for a competition at school called The Big Challenge. As part of this he was given £25 to start a business and develop it over 3 months, and at the end of it the most profit wins. Edgar did his own little competition for one of the Michael and Nibbles adventures where readers thought up their own ending and the best was chosen and the writers were featured as characters. Edgar is currently doing his GCSEs, and after already gaining an A* in Performing Arts for his first year, he’s now doing French alongside other compulsory subjects for the rest of his GCSEs. On top of this, he somehow gets in 20 hours of ballet dancing with the Northern Ballet and has recently been in a production of the Nutcracker in Bradford.

Other hobbies are reading books and indeed writing them – he is writing a short story at the moment about two men in London. Keep an eye out on the Messenger website for the George and Brian adventures.

You can scroll through our past comic strips below or visit Edgar’s Deviant Art profile.